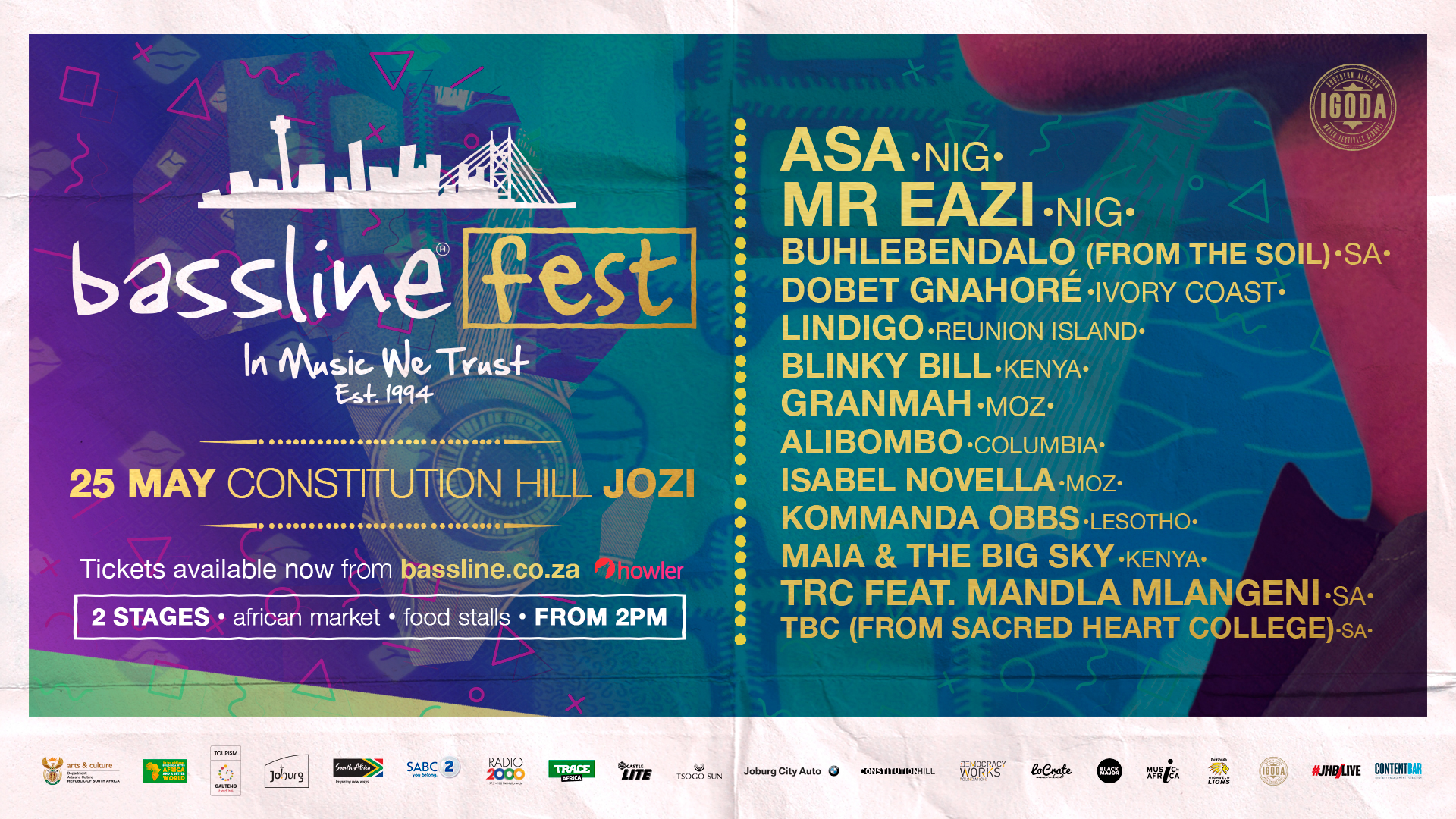 Bassline Fest is an exhilarating Music experience set in a truly urban setting at the iconic Constitution Hill in Joburg on Saturday 25th May (Africa Day), the Fest showcases the best of Contemporary African music to be seen all in one day. Under a 25-year celebratory theme, the Bassline Fest will not only celebrate Africa day, but also a milestone 25 years of democracy in South Africa, as well as the celebration of Bassline’s 25th anniversary!

12 of the continent’s biggest & freshest talent will perform across two stages with an all day Festival starting from 2pm till late. This is a family day to celebrate our African finesse.

Headlining the Fest this year are two of Nigeria’s biggest stars Asa [pronounced Asha) and Mr Eazi, aswell as our very own Buhlebendalo (from The Soil).

There will be ample good food to eat & drink at the contemporary African Market, which will also host talented artists, designers, chefs & crafters. Brought to you by Soweto Locrate market.

Following on festival trends, Bassline Fest is a cashless affair using Howler’s cashless platform, which will enable a safer, easier, faster and more secure option to purchase tickets and buy food and drinks at the Fest.

You won’t miss out if you can’t get out of the city!

Asa is Nigerian but was born in Paris. She became an artist in Lagos, fueled on old-school Soul, and was signed by a French label. She’s clearly one of the most exciting artists to have emerged in the last decade. She’s highly in-demand by festivals across the world and radios (with taste!) are giving her a special place on their playlists. Asa entered the music scene in 2007 with her namesake album titled Asa with International hit songs such as ‘Jailer’, ‘Fire on the Mountain’ she has gone on to become synonymous with quality music set apart from the usual pop offerings her country is known for. Her other albums Beautiful Imperfection (2010) and Bed of Stone (2014) have, in different ways, shown the evolution of an artist confident in her ability to deliver emotionally charged performances. Her songwriting and storytelling are just as excellent and her show at Bassline Fest is not to be missed.

Oluwatosin Oluwole Ajibade (born 20 July 1991), better known by his stage name Mr Eazi, is a Nigerian singer, songwriter, and entrepreneur. He is the pioneer of Banku music, a fusion sound he describes as a mixture of Ghanaian highlife and Nigerian chord progressions and patterns. He showed interest in music after recording a guest verse on “My Life”, a song that gained traction and became a popular record at KNUST. Mr Eazi released his debut mixtape, About to Blow, in July 2013. He gained an international audience following the release of the 2015 single “Skin Tight”. His second mixtape, Life Is Eazi, Vol. 1 – Accra To Lagos, was released on 10 February 2017. In March 2018, several outlets reported that Mr Eazi signed a record deal with Diplo’s label Mad Decent. Mr Eazi signed a licensing deal with Universal Africa, a subsidiary of Universal Music Group. Mr Eazi is currently one of the hottest artists from the Continent and will be bringing that heat to Bassline Fest.

BUHLEBENDALO (from The Soil) (South Africa)

Under a 25-year celebratory theme, the Bassline fest will not only celebrate Africa day, but a milestone 25 years of democracy in South Africa.

BASSLINE FEST forms part of the Johannesburg leg of the IGODA Festival Circuit. IGODA, meaning ‘knot’ or ‘bind together’ in Zulu, is a unique and innovative concept that brings together the finest music festivals within Southern Africa to create one of the strongest touring circuits on the African continent.